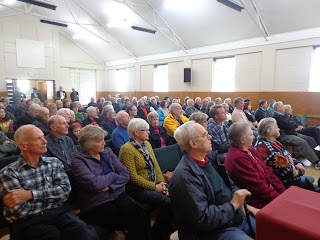 Today we launched our Bury The Pylons campaign and petition, along with Phil Goff MP, at St Davids in the Fields on Hillsborough Road.

We were quite overwhelmed by the turnout - over 120 people came along and many also volunteered to help further.

We heard from Phil Goff MP about the fairness issue behind it all; that this simply wouldn't be acceptable in St Heliers or on Takapuna Beach, and it shouldn't be in our area either.  He spoke about his intention to approach all the MPs who represent communities with pylons running through them to make this a national issue, but he will not forget that our area should be the priority, as one of the worst affected. 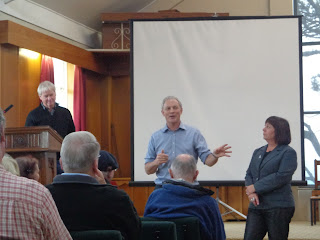 Carol Beaumont MP also spoke about the impact of the pylons on the Onehunga community, and her plans to have a similar public meeting there in support.  Jim Jackson talked about the more technical side of why and how it needs to be done, and his own experiences winning the restoration of the Onehunga foreshore.  Councillor Richard Northey addressed the impact the lines could have on people's ability to build on their own land, if proposed changes are adopted for the Auckland Council Unitary Plan.  Our own Michael Wood MC'ed and outlined the next steps for the campaign.

We'll be back in touch with the 50+ people who offered further help in the next week to make sure they have petition forms, know how to get more, and can return them for collation.  We're also looking into producing simple Bury The Pylons signs, so if you want one for your fence, can help out by sponsoring one, or want to help in other way please email us roskillcv@gmail.com to go on the campaign email list, or contact us in another way if that's easier.