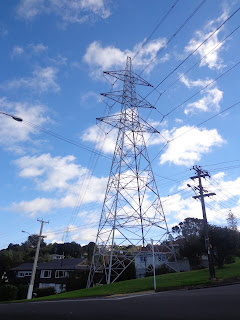 "Ugly", "Intimidating", and "Over bearing" are just some of the ways that Mt Roskill residents describe Transpower's huge high voltage transmission lines that despoil local neighbourhoods and the ecologically sensitive Manukau Foreshore. This coming weekend the Roskill Community Voice team will be holding a public meeting to launch a campaign and petition to 'Bury the Pylons'.

"Fundamentally, we don't think that our community is being treated fairly. Three separate lines of these large steel monsters cross the Mt Roskill area. They ruin views, lower property values, despoil the beautiful Manukau Harbour, and degrade the quality of our neighbourhoods. We know that this would not be accepted along suburbs bordering the Waitemata Harbour, so why along Mt Roskill and the Manukau Harbour?", says Roskill Community Voice candidate and Hillsborough resident Garth Houltham.

"Our campaign calls for central government, local government, and Transpower to advance plans to 'Bury the Pylons'. We accept that this is a big job, but there is a clear solution. Over the next three years Transpower will pay $542 million in dividends to central government. It is only fair that a portion of Transpower's profits be diverted to solving this problem, rather than subsidising other government services", says Roskill Community Voice candidate and Roskill South resident David Holm.

"This Saturday we will be holding a public meeting to launch our campaign and petition demanding action. Residents can get directly involved by signing our 'Bury the Pylons' petition that will be launched at the meeting. We know that local people are sick of being taken for granted and we already have lots of support from the community on this issue. We encourage local people to get involved so that we can win our campaign to 'Bury the Pylons', says Garth Houltham.

Roskill Community Voice is the progressive team contesting the Puketapapa Local Board for the 2013 Auckland Council elections, and is currently represented on the Board by Julie Fairey and Michael Wood.
Posted by Julie at 12:30