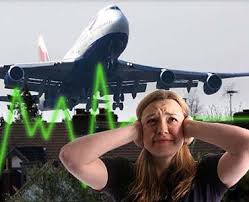 
300 residents were present at the meeting - very impressive. Not so impressive was the attitude of officials from Auckland Airport and Airways NZ who were there. "Very arrogant" and "patronising" were the words used to describe their stance. People reporting increased noise levels were accused of "imagining things" and being "led on" by articles in the Central Leader. Comment of the evening came from Judy Nichol (Auckland Airport) "We didn't tell anyone about the trial because we wanted to see whether anyone noticed any difference in noise levels." What! "But we do want to consult with the community now." A bit late Judy. The trial finishes in October this year.

Intriguingly what developed during the meeting were questions about what other changes are being trialed alongside the SMART Approaches?   The officials were quick to put down many noise complaints because they weren't part of the new approach routes.  If this is the case then something else is going on because thousands of residents are being affected by increased aircraft noise from aircraft evidently on the old routes as well as the new routes .

What we want is meaningful consultation including information that hasn't been massaged to suit the proposed changes.  And a cost benefit analysis that includes the impact on our communities. We could do without the green-washing as well.
Thank you The Plane Truth Action Group for organising the meeting and all the work that you are putting in to try and get some real information out about what is going on. Sign their petition!
http://www.thepetitionsite.com/328/998/681/stop-the-auckland-airport-implementing-a-new-flight-path/

and visit their face book page:
https://www.facebook.com/pages/Auckland-The-Plane-Truth-Action-Group/579257782136756?ref=profile
Posted by Michael Wood at 18:07